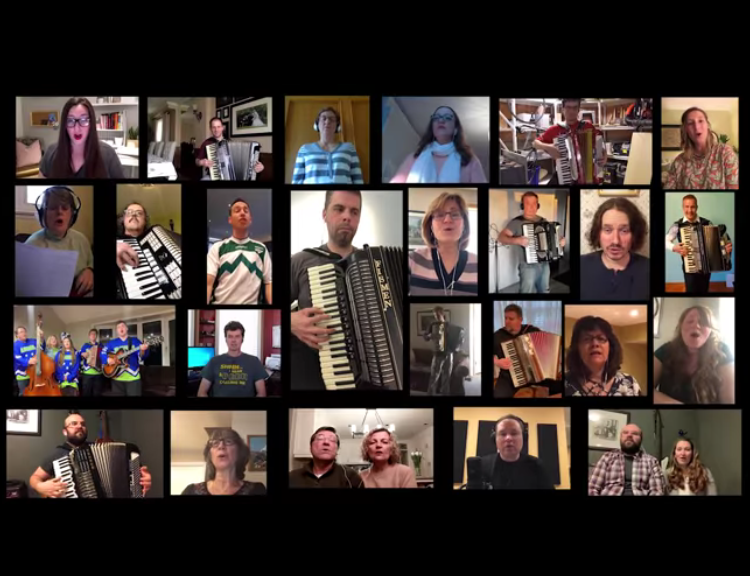 Our compatriots in Canada have decided to use the time of quarantine for virtual socializing and consolidating Slovenian consciousness and attachment to their roots. And how could they do it better than through music. They recorded the song "In the Silent Valley". The organizer of the project, Canadian Slovene John Kajin, described the path from idea to realization. You are invited to read and watch the video.

At the beginning of March 2020 while scrolling through Facebook, I came across several videos of songs being posted  featuring many different people singing together, when we couldn’t physically be together. I thought this was a great idea and I knew many of my friends would be interested in taking part in this project. The song we picked was Folsom prison Blues by Johnny Cash and we put the video together and posted it on Facebook in March 2020.

We got such favourable responses and everyone enjoyed it, so we decided to do another video. This time a Slovenian classic, V Dolini Tihi by Ansambel Lojzeta Slaka. We have a large Slovenian community in the southern Ontario region with many talented musicians and singers, so I sent out the idea to the community and was amazed at the response I got. This was all happening at the beginning of Covid 19, so I thought this would be a great way to get the Slovenian community together while staying apart.

In order to put the video together, we got Louis Mavec from Murski Val to play the song on accordion so everyone else could follow along when they made their video’s.  Slowly the videos started coming in and at the end, we had 9 accordion players, 4 button box players and many singers. Unfortunately , we were not able to incorporate the button box players into the video. Many of our accordion players live in the Southern Ontario region but we were also able to recruit a close friend from Chicago to be part of the is video as well.

Once we got all the videos, I was lucky enough to know a very talented person who was familiar with putting this videos together. This project could not of been completed without Travis Blackwell’s knowledge and skill. Travis has also completed several other videos for Facebook for our local Slovenian dance Group, Mladi Glas/ Planika.

Our Dolini Tihi video have been viewed by many friends, family as well as other people in Ontario, the U.S.A and now in Slovenia. I haven’t tracked who has watched the video but I’m glad to say we had a lot of positive feedback.

You can watch the video below or by clicking on this link.

San Francisco’s Slovenian Community has been celebrating Pust annually at the SF Slovenian Hall since the 1930’s.   Sponsored by the local SNPJ lodge, this has been an annual event except for a brief interruption during World War II.   In the

Invitation to a presentation of Slovenian universities

If you are interested in studying in Slovenia, you are welcome to attend the new online presentation of Slovenian universities. The presentation prepared by the Study in Slovenia team, at the initiative of the Government Office for Slovenians Abroad, will

The U.S. Embassy Slovenia and the American Slovenian Education Foundation (ASEF) are jointly organizing The Slovenian American Virtual Academic Symposium (SAVAS), which will take place online on Monday, November 16, 2020, from 5 PM to 8 PM CET / from

Our compatriots in Canada have decided to use the time of quarantine for virtual socializing and consolidating Slovenian consciousness and attachment to their roots. And how could they do it better than through music. They recorded the song “In the

Slovenian Australian Academic Association (SAAA) cordially invites you to the 4th SAAA Conference, which will take place for the first time on-line over Zoom on 20 November 2020 between 12pm and 4:30pm Melbourne & Sydney time. This year’s SAAA conference will

You are welcome to join us at the interactive info day STUDY IN SLOVENIA – presentation of Slovene universities for Slovenians abroad. The presentation will be held on 3 November 2020 at 5:00 p.m (CEST). The online info day will give