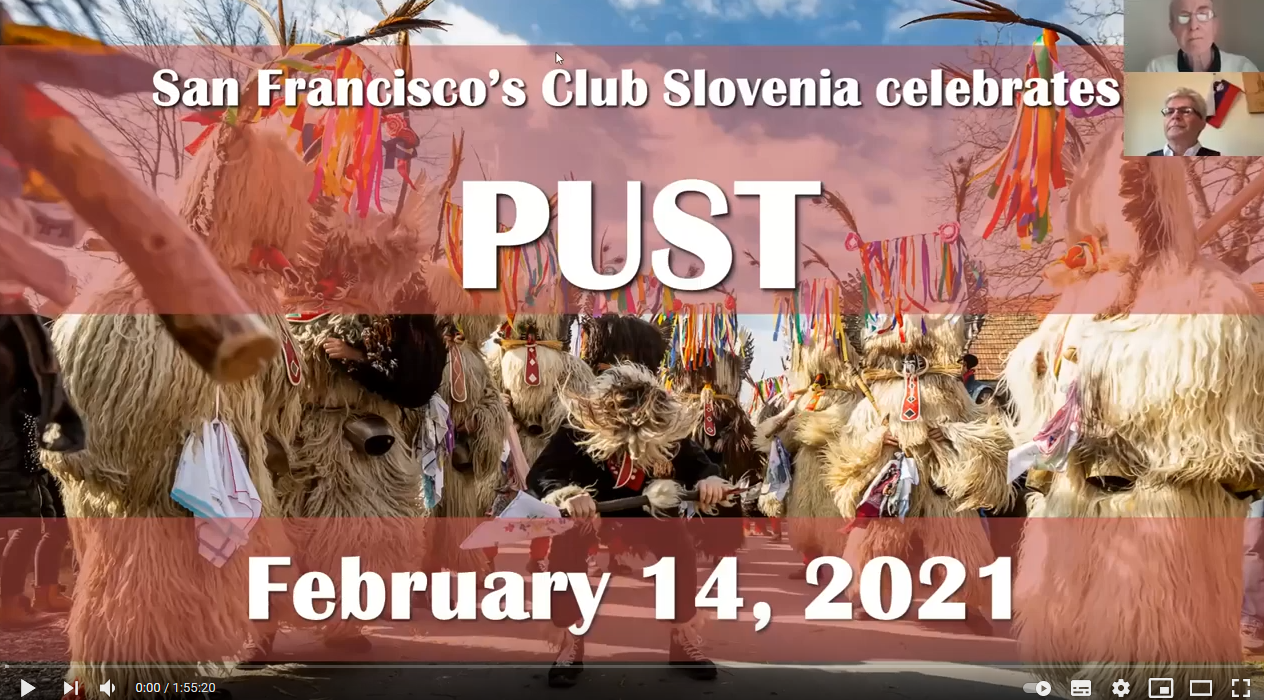 San Francisco’s Slovenian Community has been celebrating Pust annually at the SF Slovenian Hall since the 1930’s.   Sponsored by the local SNPJ lodge, this has been an annual event except for a brief interruption during World War II.   In the 1960’s, a sit down dinner featuring krvavice was introduced and has continued ever since.  The head cook and helpers would gather on the Thursday prior to the event, making upwards of 700 lbs. of krvavice!  The number of attendees would often exceed the hall’s capacity, where on some occasions, late comers had to be turned away! You can read more about the event below. It was written by John Hutar.

In the fall of 2020, several members our community got together and organized a Virtual Vinska Trgatev.  Moving this event to a virtual platform was a natural choice for its sponsor, Club Slovenia (first organized in 1922 – nearly 100 years ago!).   Early Slovenian tech pioneers France Rode and Zvonko Fazarinc contributed to the early success of then tech start-up Hewlett Packard.  This Slovenian tech tradition now continues on under the leadership of Dr. Jure Leskovec (Stanford University Professor) and the American Slovenian Education Foundation (ASEF).  With the support of Club Slovenia and participation of musicians and singers who regularly performed at the live event, our inaugural virtual event held in September 2020 was a huge success.  We were optimistic that by February 2021, the pandemic would be behind us and we would gather in person for Pust.

When it became clear that the shelter restriction would prevent an in-person Pust event, Jozef Antolin (Board Director of the Slovenian Progressive Home) started recruiting the “Trgatev Group” to participate in a virtual Pust event.  David McCormick, president of Club Slovenia, committed the Club’s support of the event.   The tradition had to live on!

The virtual platform allowed us to include artists from Slovenia in addition to our friends in California and Colorado.   The final result was a 100 minute show that included 20 musical performances and cultural presentations.  Nearly 100 viewers logged on to the live zoom event from locations throughout California, the United States and Slovenia!  Both the Trgatev and Pust recordings now reside on the YouTube channel San Francisco Slovenian Cultural Events.

None of us involved do this for fame or notoriety, but all are united in the pride of the Slovenian culture that binds us together.  Our connection to Slovenia comes in many varieties:  some were born there and immigrated to the United States; others are descendants of first, second or third generation immigrants. One is American born but lived in Slovenia for nearly a decade mastering his trade.  One discovered later in life that she has Slovenian roots and was told by a friend “you should come to our Slovenian hall sometime”.  As is typically the case, after her first visit, she was hooked!   She subsequently enrolled in our Slovene language class and has visited Slovenia to see the place of her ancestors.   One performer was a very successful recording artist in Slovenia who now resides in Northern California.

Imbedded in our San Francisco Slovenian Community is the quality of cooperation.  Whether you arrived from Slovenia recently to work at a tech start up, or are connected as a 3rd generation Slovene whose family first settled in a mining town in Minnesota and eventually made their way to California, our community welcomes you!  Bring your accordion and play a song with us; let’s enjoy some food and a glass of wine together; and of course, lock arms and sing a Slovenian song and exchange a few words in Slovenian!

Our Bay Area Slovenian community may not be the largest, but other than being in Slovenia, you won’t find one in a more beautiful location!

Sunday July 3rd, 2022 started out feeling like a special day.  The sky was bright blue, the air was a comfortable 20 degrees, and there was plenty of people buzzing around the hall.  The flags lined up along the road…

If you are interested in studying in Slovenia, you are welcome to attend the online presentation of Slovenian universities. The presentation prepared by the Study in Slovenia team will be held on Thursday, 10 February at 2pm (CET) and is…

SGBN invites you to the last edition in 2021, of Slovenian Businesswomen around the Globe (and from Slovenia)

On this 8th virtual meeting will host a special guest, a Slovenian entrepreneur Nuša Pavlinjek Slavinec, MSc, a managing director at Roto Slovenia. Run by the third generation of Pavlinjek Family. Nuša is involved in the planning and leadership of strategic…

SAVE THE DATE, virtual meeting MORE AND MORE BUSINESS. SLOVENIAN GLOBAL  BUSINESS NETWORK  FOR YOU  On December 14 th at 4 PM CET we will introduce SLOVENIAN BUSINESS COMMUNITIES from neighboring countries AUSTRIA,ITALY, CROATIA AND HUNGARY,  competitive and productive business to you.  You will…

If you are interested in studying in Slovenia, you are welcome to attend the online presentation of Slovenian universities. The presentation prepared by the Study in Slovenia team will be held on Thursday, 18 November, at 2pm (CET) and is…

Welcome to Slovenski Dom and MOYA Financial virtual seminar series.  This is our fourth seminar. It is titled, “70 Wonderful Years of Slovenian Polka in Canada” by Walter Ostanek.  Walter won three Grammys for best polka album (1992, 1993 and 1994)…